By the way: all the books are available to view and/or download at the Digital Comic Museum.
I took care of the last missing issues. So enjoy.

“The Great Pre-Code Horror Swindle” could have been the overall title to Fiction House’s line of horror books. Yet after five issues of shameless 1940s reprints they made an effort and produced some all-new books as well.

Their output however remained a meager one. 13 books in total are only a footnote in horror history. But one can make fun discoveries everywhere. What we tried with FICTION HOUSE HORROR is to find where the reprints came from – and how they have been doctored to fit into the 1950s GHOST COMICS. 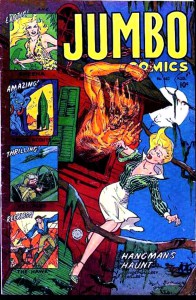 A word about Fiction House: founded in 1938 and closed down with the advent of the Comics Code in 1954, they published legendary books like FIGHT COMICS, JUMBO COMICS, JUNGLE COMICS, PLANET COMICS, RANGERS COMICS und WINGS COMICS.

They filled their books with Iger studio material and formed their own editorial staff at the same time. In the late 40s however they disbanded the artists’ bullpen again and continued to put out books with freelance contributions.
In the early 50s the company tried to maintain their publication schedule, but switched more and more to a merely quarterly publication rhythm. At the end of 1952 Fiction House started to thin out their line-up significantly.

But they held on to GHOST COMICS, for full 11 issues, starting at the end of 1951. Irritating though is their short intermezzo with MONSTER, the second horror title, which came out only twice. MONSTER – a title, by the way, which is just great for a horror book – and was never used before!

But let’s have a look at the artists – with emphasis on the young guns delivering fresh artwork.

He never drew a single story for Fiction House horror, but those covers! 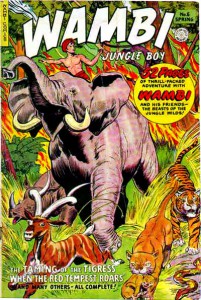 Whitman starts his run on gorgeous covers for Fiction House.

You can’t talk about Fiction House and not mention the covers. They CARED for covers. They knew what sold a comic book at the newsstands. Company president Thurman Scott supervised personally the design of every single cover (as an anecdote tells us in the delightful book “Comics Between The Panels”).
Fiction House covers are gorgeous.
Their use of color is only superseded by L. B. Cole’s wizardry at Star Publications. Vibrant title pages, often using a scantily clad “good girl” in the center. And that goes for the horror books as well! And Maurice Whitman did ALL of them.

Starting out in 1946 as regular artist for RANGERS, PLANET, JUNGLE and WINGS COMICS, Whitman was first assigned a cover in 1950 (WAMBI JUNGLE BOY #6). In 1951 followed LONG BOW INDIAN BOY and more jungle jobs with KAÄNGA and SHEENA.
Having dropped illustrating stories (mostly), Whitman was responsible for every Fiction House cover. From 1952 on his work graced also the title pages of FIGHT COMICS, JUNGLE COMICS, WINGS COMICS and INDIANS. He stayed the exclusive cover artist right up to the end.

Interesting young man, who worked only for Atlas/Marvel and Fiction House, starting out around 1952. Half of the time he used a steady inker for his pencilwork – Jack Abel. I saw the most extraordinary horror story by Benulis for STRANGE TALES #10 from Atlas. In “The Frightful Feet” he created a very weird animal kingdom that looked like Disney on LSD. Ever since I have been impressed with Benulis. Good man. Inventive.

It’s a downright shame that Benulis wasn’t around earlier. He would have added a lot to pre-code horror in general.

In his early days Jack Abel was surely more able (sorry!) on inks than on pencils. At the end of 1956 he found a home at DC, drawing mostly war stories.
As I am no expert on Jack Abel, please have a look at him online – to see his impressive Wikipedia entry click HERE.

Very minor artist who allegedly ran with the Iger Studio from 1952 to 1954. Worked almost exclusively for Fiction House. Grand Comics Database lists 39 spottings in total. Signed some of his jobs with “Johnny Bell”. Belcastro has a scratchy style which is actually quite likeable. Fits more than just decently into these horror comic books. 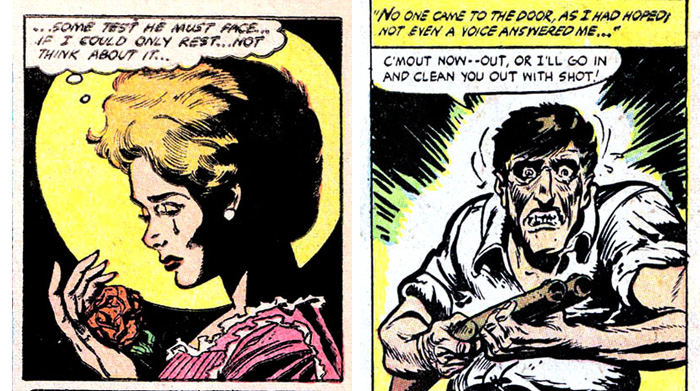 No first name has ever surfaced with Mr. Albert. And he’s only credited with 21 jobs for Fiction House. Not a bad artist at all, mysterious Mr. Albert fits in nicely with colleagues Benulis, Bill Discount and this next one:

And the next phantom pencil swinger, the third in a row. 34 spottings. He loved to swipe, mainly from Alex Toth. But again, like Albert and Belcastro, not a bad artist at all. His small oeuvre is limited to the years 1952-54 as well.

We post stories from all three in our “Stories” section – because they have earned it!

I apologize for not appreciating this artist. Frankly, I hate that style of drawing. This is why I am into 1950s artwork.

The same goes for one of the few women employed in the early comic book industry. Of course, 1940s artwork has its moments and some very creative page compositions now and then, but it’s soooooo bland in general. Sorry again. 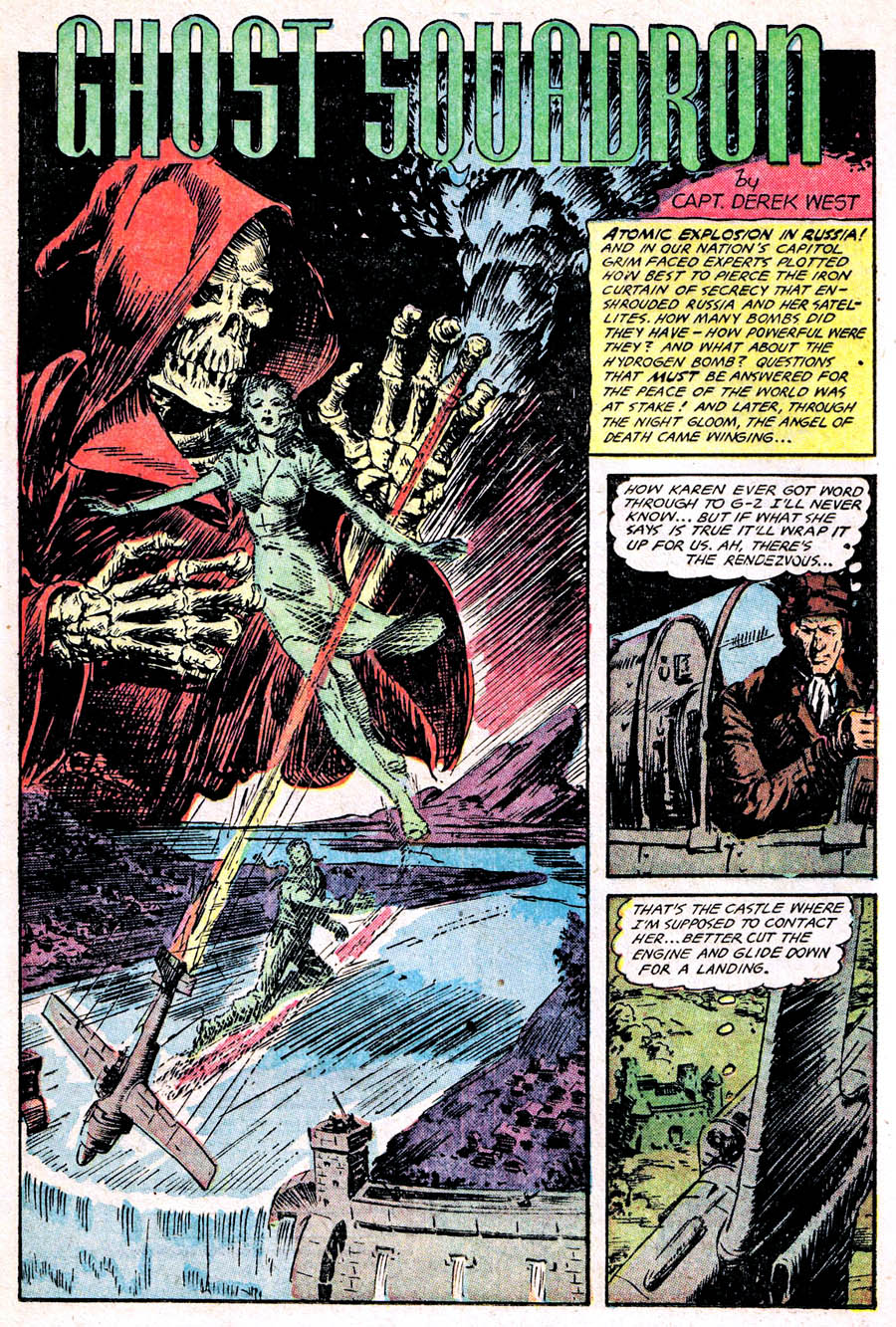 The exception to the rule: Now here’s a man who is obviously no comic book artist. This guy is an ILLUSTRATOR. Astarita puts glamour into a simple comic story.  A veteran of the first hour (starting out with NEW COMICS #3 in February 1936!), Astarita landed at Fiction House in 1942 doing “Inspector Dayton” for JUMBO, “Hooks Devlin” for FIGHT and “Kaänga” for JUNGLE COMICS. Interesting to us is his stint on “Ghost Patrol/ Ghost Squadron” for WINGS.

Astarita’s goal was to put some art into comic book pages – and was a great inspiration to many fellow artists, among them George Evans and John Celardo.
The best comic book encyclopedia ever published (“Comics Between The Panels”) corrects me and points out that Astarita was the FIRST comic book artist to sign on with the FIRST comic book shop there ever was (Harry Chesler’s in 1935). That is just… Wow!

Jerry Grandenetti and/or Will Eisner

(or: “The Case of the Absent Artist”)

Fiction House ran a beautiful series called “The Secret Files Of Dr. Drew” in RANGERS COMICS. Three of these were reprinted in GHOST / MONSTER COMICS.
Comics history believes these to be the work of Jerry Grandenetti – because they were signed by him. This is a mysterious misguidance.

“Dr. Drew” was drawn by no one else than the great Will Eisner himself.
For further discussion and detailed information please look up our section “Art Spotting Controversy” in the menu bar – or just click HERE.

Fiction House artists’ “scoreboard”. Who did what and how much? General count, added together from both series and sorted by number of pages illustrated:

Good to see that Fiction House horror can be linked to the names of three 1950s artists:

Fiction House sees no contradiction in blending horror with good girl art. Hey, that’s what they’ve been doing for years – why change a winning team and so forth, yadda yadda… Clearly an indicator, though, where they put their priorities.

We talked a bit about the outstanding covers above (see: Artists – Maurice Whitman), just let me elaborate some more in respect to the “eye candy” factor. A pubescent male teenager will automatically reach for a display of a damsel in distress. Is it fair that he may have been tricked into buying a bluff package?! The stories inside are reprints, often mutilated, the content is carelessly mashed together?! Of course it’s not fair!

But who could blame him? He could have gone for that horror book from Ace Magazines. Those with the excruciating balloons on the covers! Let’s make a test: You got 10 cent in your hands, buy a comic book please. Here’s your choice: 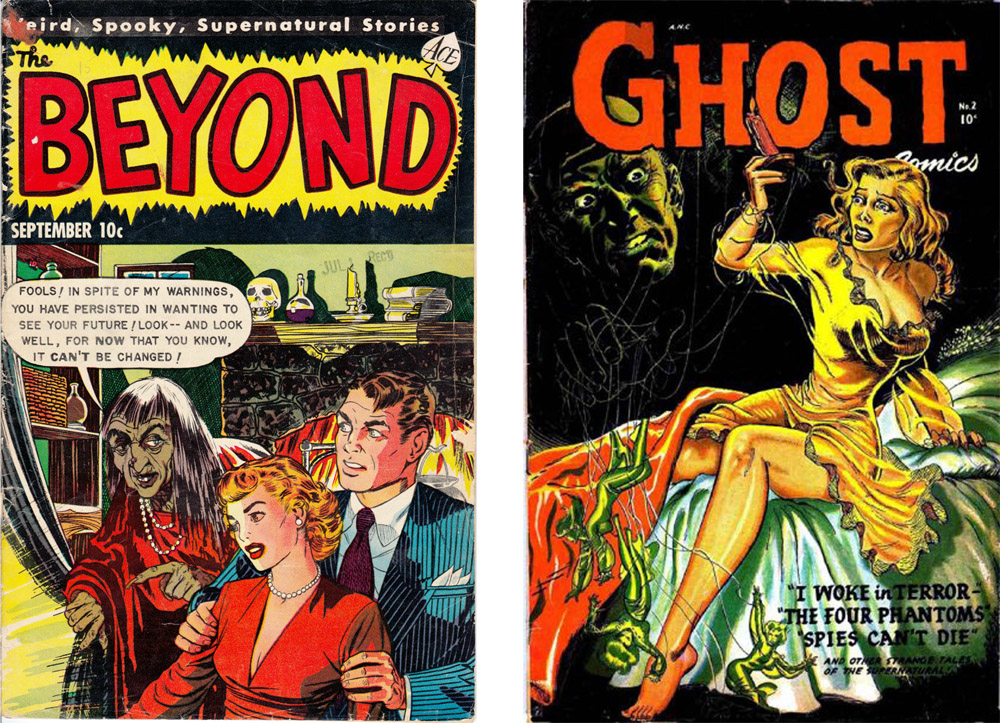 Quick! Choose! What will it be? Hmm?

The Ace book would have been the “sustainable” choice. Well-written, original art, but no babes. But all these are thoughts you develop decades after the buy.

A note on the margin: I find it highly irritating that so FEW companies employed continuously working cover artists. They missed the point of creating attention and recognizability of the product completely by randomly assigning whoever was free at the moment to do a cover.
They would not have gotten very far in modern marketing. Well, they didn’t get very far in the old marketing…

All the horror books I’ve encountered so far feature a text story without pictures (usually two pages long) – adding a non-comics shiver tale to their contents. Fiction House is different. 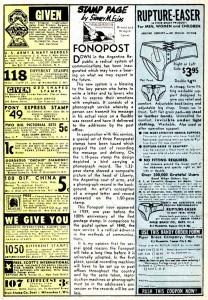 Gosh and golly: a stamp „page“

They give you as a text article the “Stamp Page”. Which is no page, but only the third of a page. It’s a text column squeezed between two advertising columns. That’s why I overlooked it first. But it’s there, issue for issue. A man called Sidney M. Elias enlightening you about the wondrous world of stamp collecting.

I don’t care for stamps, so I did not read it, but it seems they published the same article over and over again (not only one, mind you, but an assortment of stamp gems).

Just another sign that the company produced as effectively as possible; cost-effectively and reader-dontgiveadamnedly. I made that word up, so what?

To give you an overview of the company’s output, here’s a listing of all their comic books from beginning of 1951 to the end of 1954.
Left column: horror books  –  Right column: every other comic book published in these years.

Both issues of MONSTER have been published sometime in 1953, our placing them in summer and autumn is speculative.

Oddity in publication schedule for INDIANS which shows a bi-monthly rhythm in 1952. There’s INDIANS #13 in August, INDIANS #14 in October – and INDIANS #15 in “Fall 1952”. Then INDIANS #16 is labeled “Winter 1952”. So where exactly does #15 come out? In November (which would go against the bi-monthly schedule)? In December? Might be, but is that “Fall” anymore? And winter is pressing with its # 16…

So you’ll find a strange occurrence in my listing: INDIANS #15 comes out before INDIANS #14. Just to let you know I do not approve of Fiction House’s way of indicating their dates of publication. A similar case is RANGERS #67 / #68…

First they want to cash in on the horror boom and put out old material wrapped in fresh pell-mell covers. Then they start giving a damn in mid-1953 and produce original art, but with the advent of the year 1954 the show is closing down.

Fiction House has already canceled their flagship title JUMBO COMICS and tries to hold on to JUNGLE, WINGS, KAÄNGA and PLANET. And GHOST COMICS as well!

They seem to set high hopes in horror, but all is lost in summer 1954 – and all titles get axed.


Warning: count(): Parameter must be an array or an object that implements Countable in /www/htdocs/w014acc8/horrornet/wp-includes/class-wp-comment-query.php on line 405