Jerry Grandenetti and/or Will Eisner

(or: “The Case of the Absent Artist”)

Fiction House ran a beautiful series called “The Secret Files Of Dr. Drew” in RANGERS COMICS. Comics history believes these to be the work of Jerry Grandenetti – because they were signed by him. This is a mysterious misguidance.

It is Jim Vadeboncoeur Jr.s strong belief (and I concur) that “The Secret Files Of Dr. Drew” were not illustrated by Grandenetti, but his employer himself – Will Eisner.
Why is that you might ask? I don’t know!
A favor? A ruse to give him a head start in the industry? A lost bet?

Please look at Eisner and then look at anything Grandenetti did (which is NOT Dr. Drew) and tell me you (still) believe that Grandenetti drew Drew.

Better yet: Look at the “Dr. Drew” story in RANGERS COMICS #57 to #60  – this is Grandenetti! Totally different style. 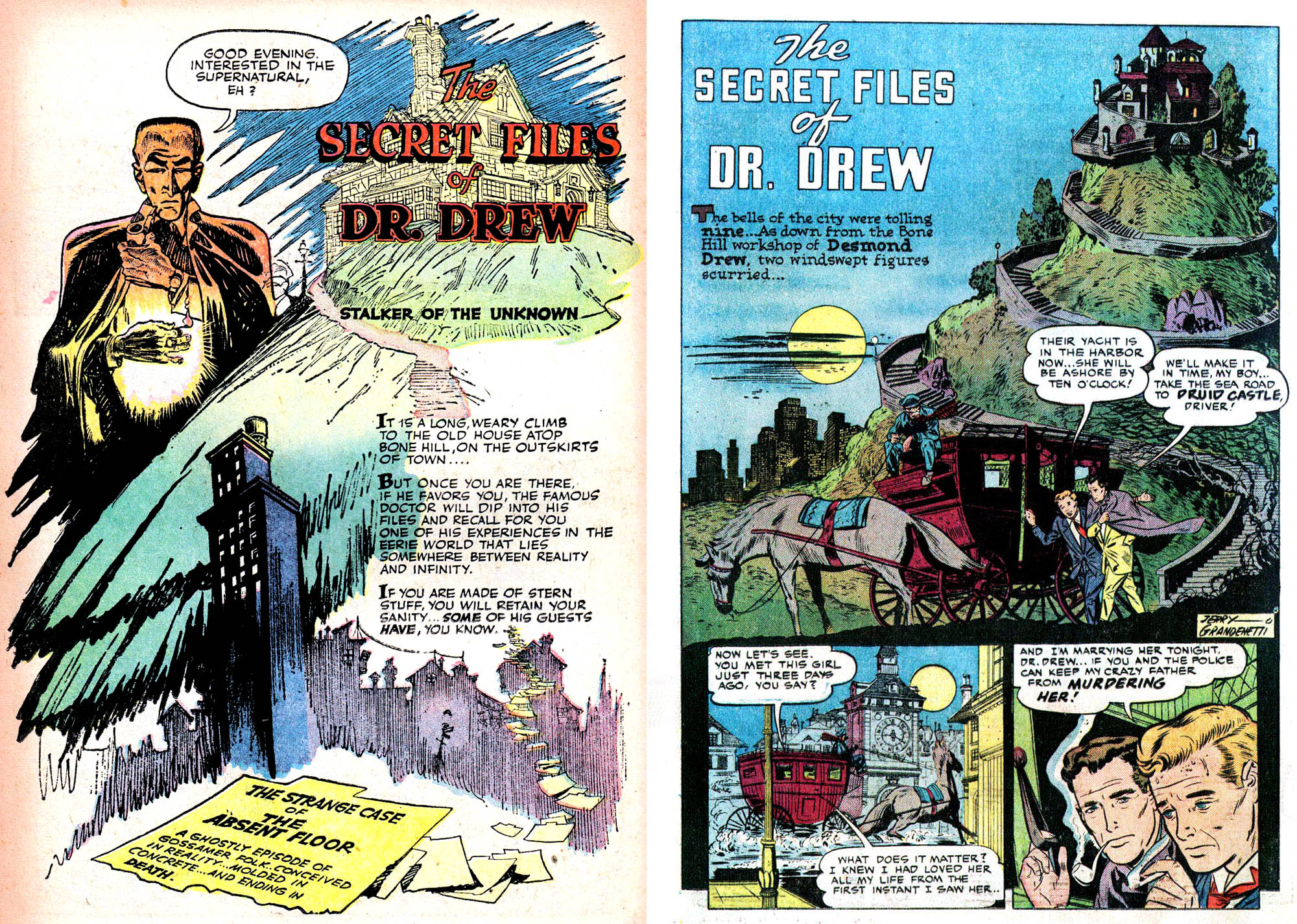 Or look at it this way: Let us assume (for argument’s sake) that Grandenetti really illustrated ALL 14 “Secret Files”. Why in hell would he do the first ten stories in Eisner’s style – and then switch to his own style (which looks so much worse in comparison)?!

To me there’s no way around it – Dr. Drew was drawn by Eisner covering for Grandenetti up to RANGERS COMICS #57.  Even the lettering changes.

I won’t spare you the rumor now. There runs a rumor that Will Eisner never drew anything by himself. That it was ALL uncredited work by Grandenetti. Have a look if you like and scroll down to the last comment HERE – was Grandenetti the real Eisner???

This could grow into a serious conspiracy theory, folks…

Hearing about that, Jim Vadeboncoeur, Jr. threw his hands up in horror and delved right into his comics vault – to present us with a long overdue research.
And now over to Jim with the detailed analysis.
Jim, what have you got for us?

„Jim here. It’s best to give my evidence and reasoning first hand.“

All that I know about Jerry Grandenetti prior to that first “Dr. Drew” (in RANGERS COMICS #47 June 1949) is that he had been Eisner’s assistant on “The Spirit” since 1947 and had one credit in BASEBALL COMICS #1 (Spring 1949) prior to springing „fully Eisner-ized“ into the world.

Upon reviewing that credit (see below), however, I find a Jules Feiffer story with a Grandenetti caricature of Babe Herman, which doesn’t give me much indication of his drawing abilities. 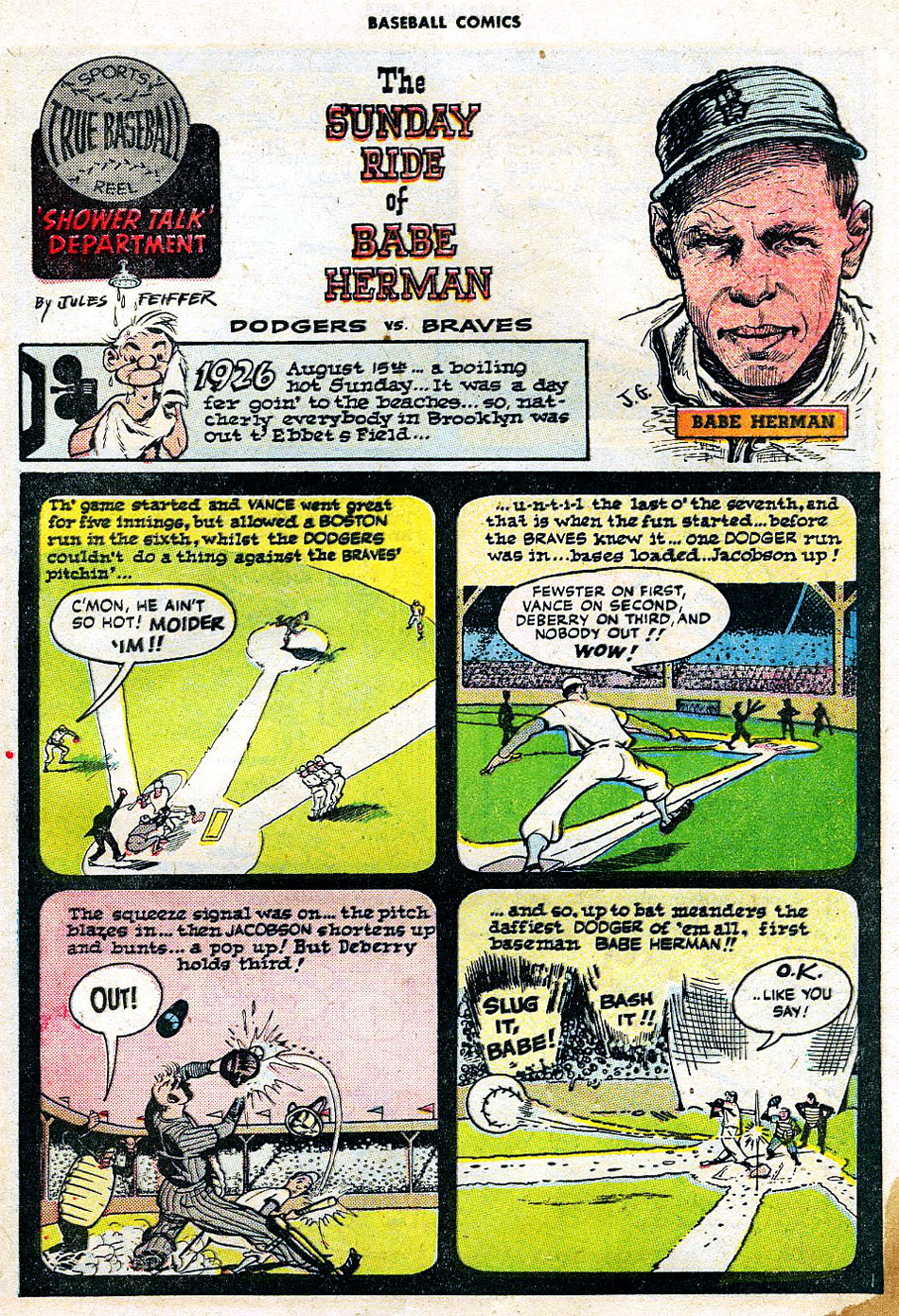 This is JG’s first known solo comic work, Spring 1949, but I think that he ONLY did the portrait of Babe Herman. After all, that is what is actually signed „JG“.

Is this baseball story what Grandenetti would look like emulating Eisner? I don’t think so, and I don’t think it’s him.
It’s signed „by Jules Feiffer“. Are we supposed to believe that he is the writer? We’ve got Abe Kanegson lettering, too, but then it’s a comic published by Eisner.

There is nothing known to be signed by Grandenetti prior to this portrait.
Those crediting him with „being Will Eisner“ or „being The Spirit“ in the late 1940s have no historical basis to rely upon.

It has no validity beyond the “Dr. Drews”, which I am convinced are drawn by Eisner, Feiffer, Grandenetti, Kanegson, and Shop.

My opinion: „The Sunday Ride of Babe Herman“ is Jules Feiffer and the Eisner shop, probably including some Grandenetti on inks, but not pencils.

Why is Eisner publishing comics?
My opinion: “The Spirit” is losing newspapers and not bringing in sufficient income to cover payroll for the shop personnel. Eisner is diversifying, or trying to.
Eisner’s comic publishing fails, however. Sports comics never managed to make a dent in the industry and 1949 was awash in romance, crime and horror.

My opinion: Eisner next tried to bring money into the shop by creating a feature for which he would get paid, but for which Grandenetti would get credit – effectively creating a demand for Grandenetti’s work outside of the shop. One less mouth to feed.

The fledgeling grows up and moves out of the nest and can feed himself. Jerry’s not quite ready, but he works hard at it and within a year and half, he’s on his own. Fiction House bought the feature and, eventually would also take over “The Spirit” reprints from Quality.

To demonstrate the difference between Dr. Drew with Eisner’s help and Jerry on his own, here are two pages from April of 1950:

First up is page 5 from the „Dr. Drew“ story in RANGERS COMICS #52
(click picture to enlarge) 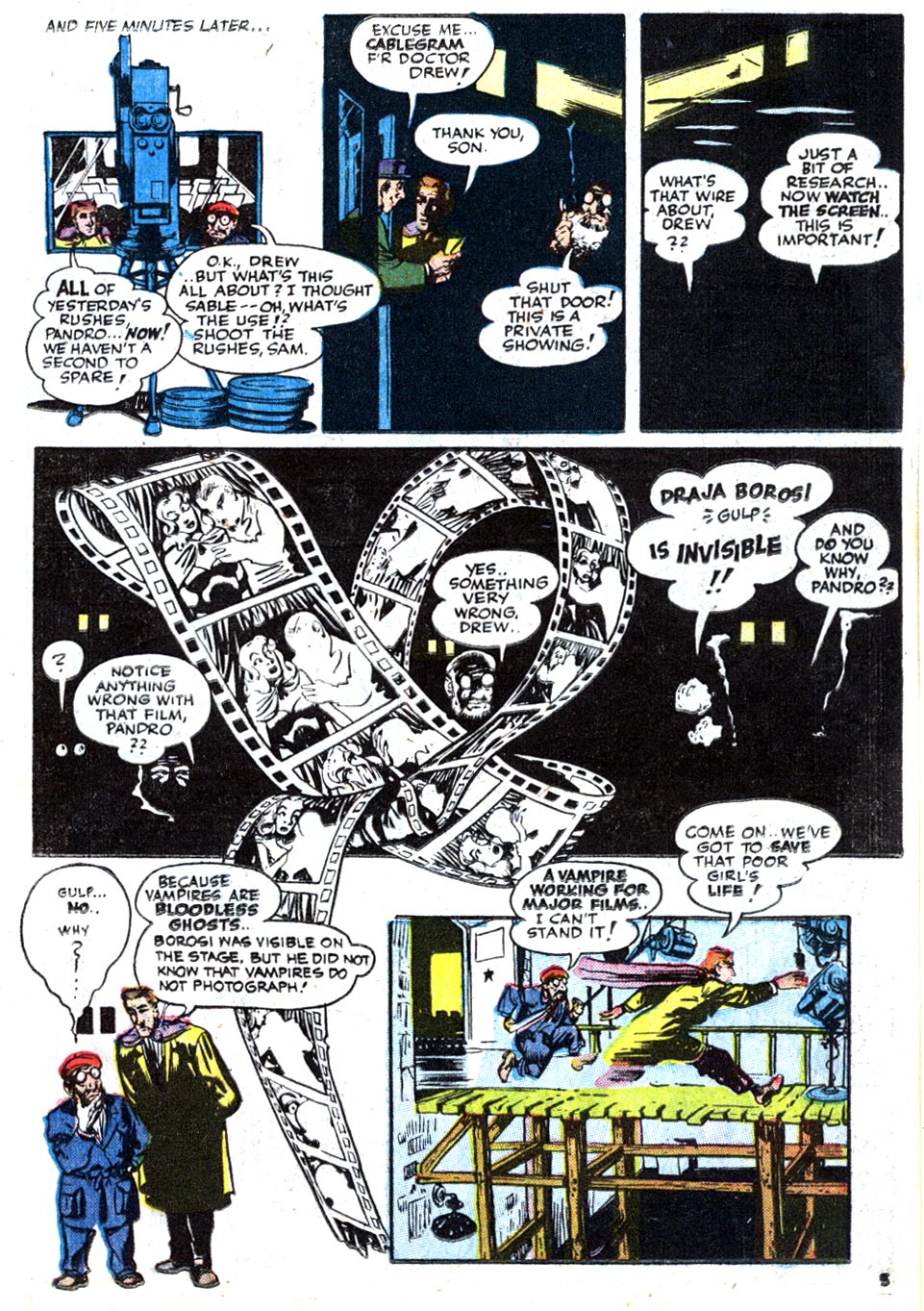 I believe that the Gleason signed Grandenetti is solo Grandenetti and that the Fiction House Grandenetti on the ten “Dr. Drew” strips until December 1950 are a product of the Will Eisner “Spirit” Studio – done to jump start the career outside of the studio of a very talented but unknown studio member.

BOTH of these are SIGNED Jerry Grandenetti. It doesn’t take a genius to figure out that he had help on one of them. And so what?

He was 24 years old, on his first job and he was learning as he went. He was doing great!
He wasn’t Will Eisner, but then NOBODY was Will Eisner except Will Eisner!

This whole „he said“, „he lied“, stuff is nitpicking bullshit.
Grandenetti stated that Eisner created the feature and that Jerry had to do it in Eisner’s style.
Duh? Yeah, so?

The evidence has always been in front of our eyes.
Just like Eisner created “The Spirit” and Grandenetti was hired to do THAT in Eisner’s style. The ONLY difference in the two stories in the signature on the strip. And Eisner’s motivations of humaneness and generosity – which no one wants to cede to him.

Thank you very much, Jim. And back to FICTION HOUSE HORROR.
As a „bonus post“ we present the whole „Secret file of Dr. Drew“ from RANGERS COMICS #52.
Enjoy. 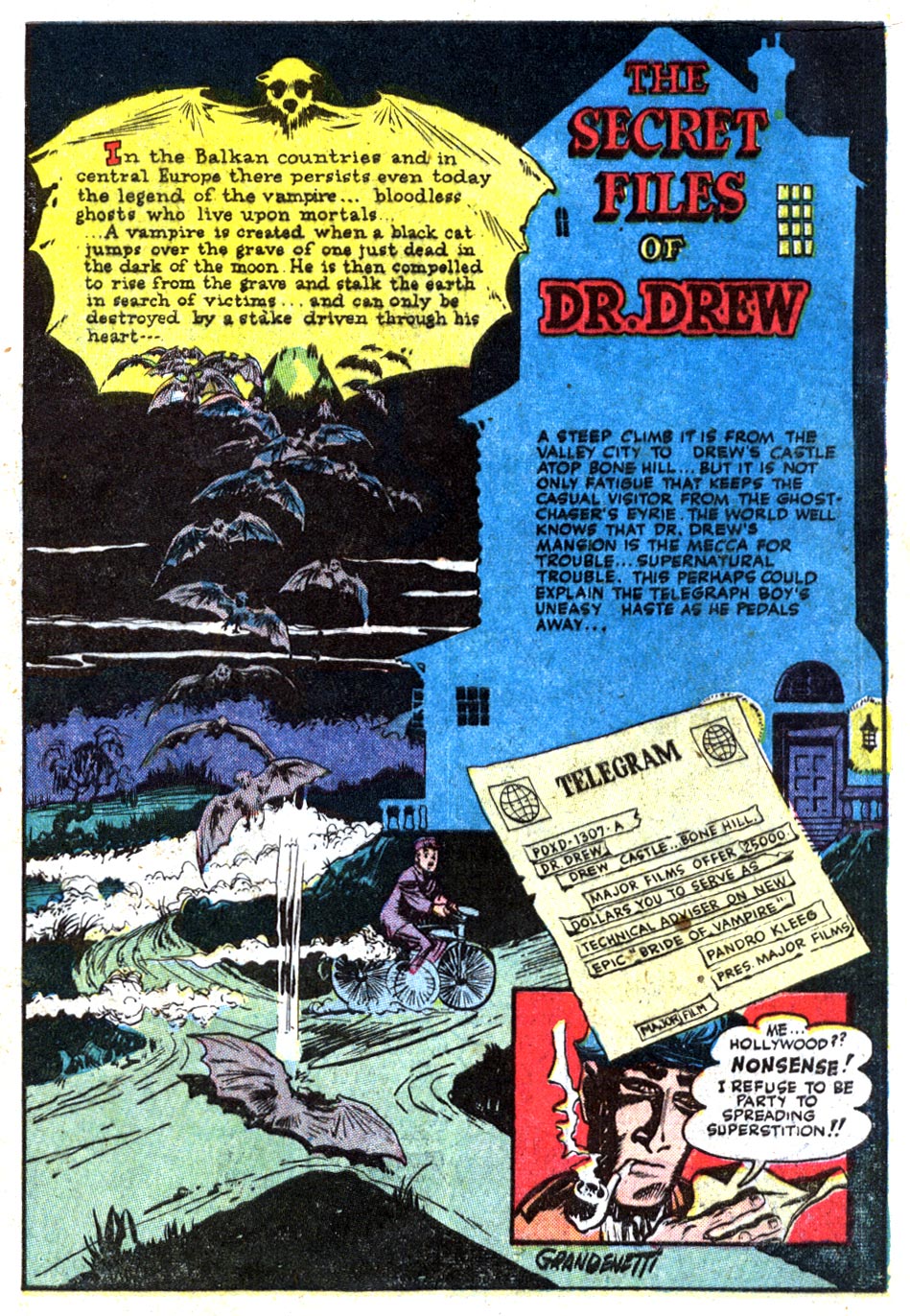 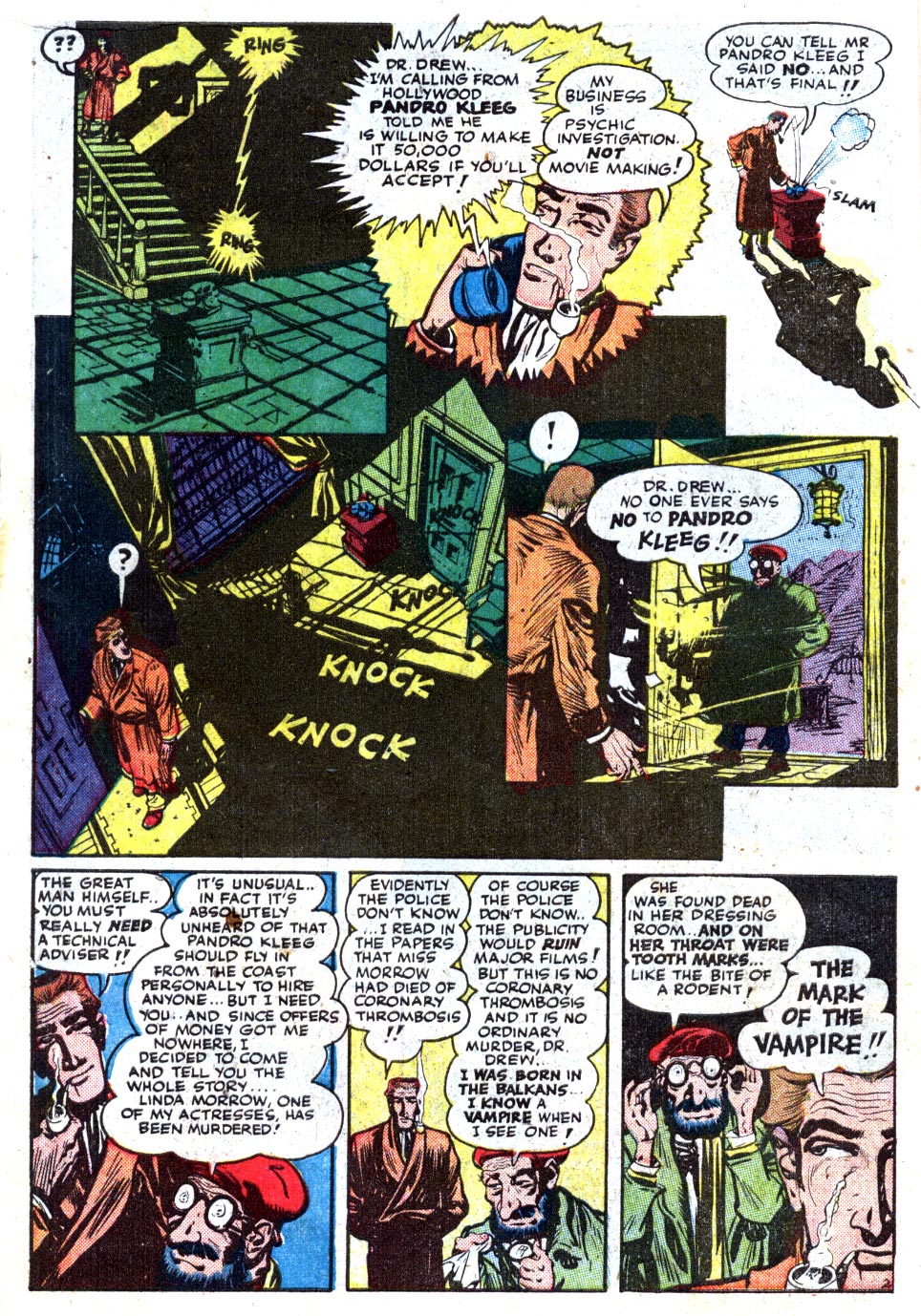 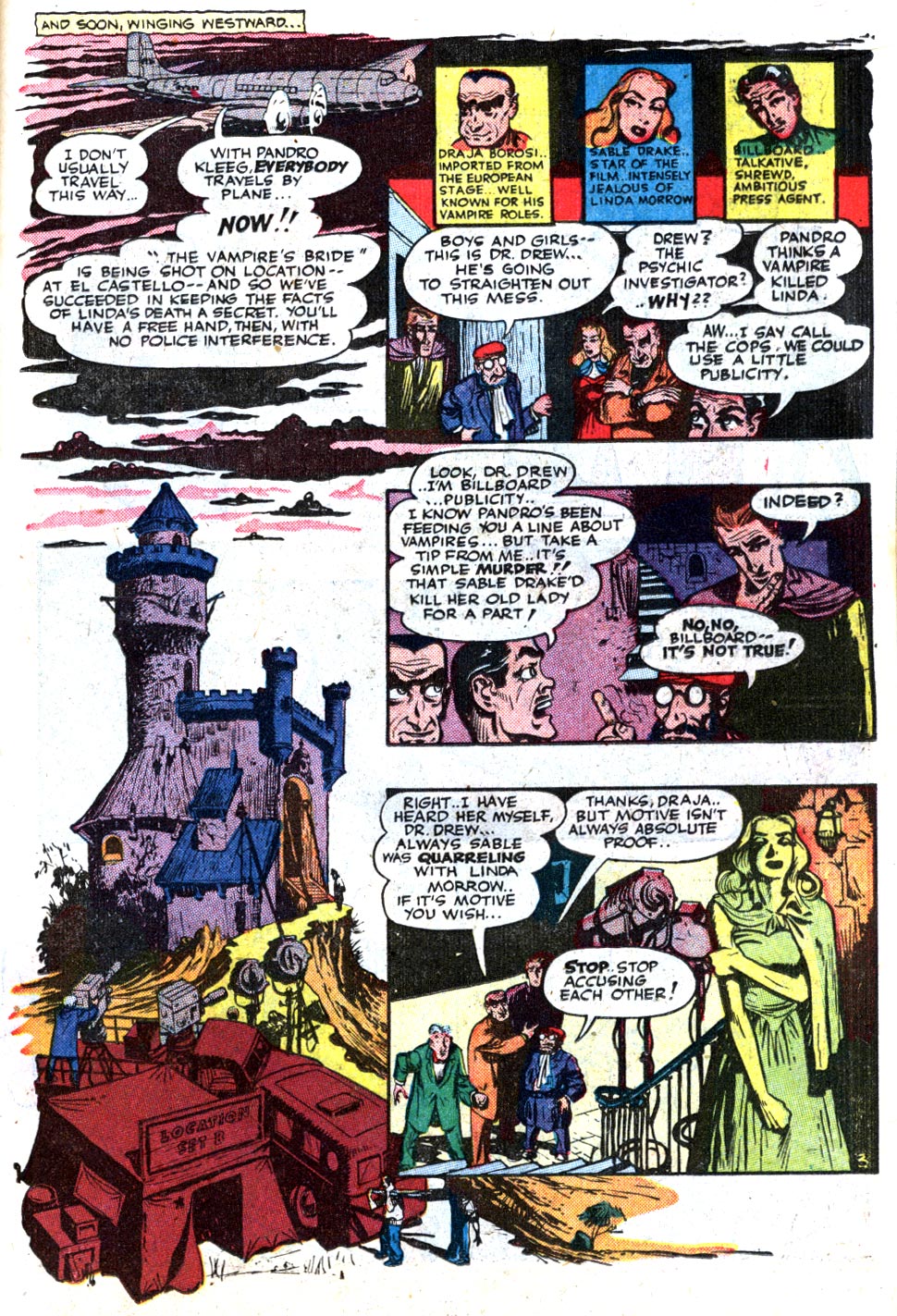 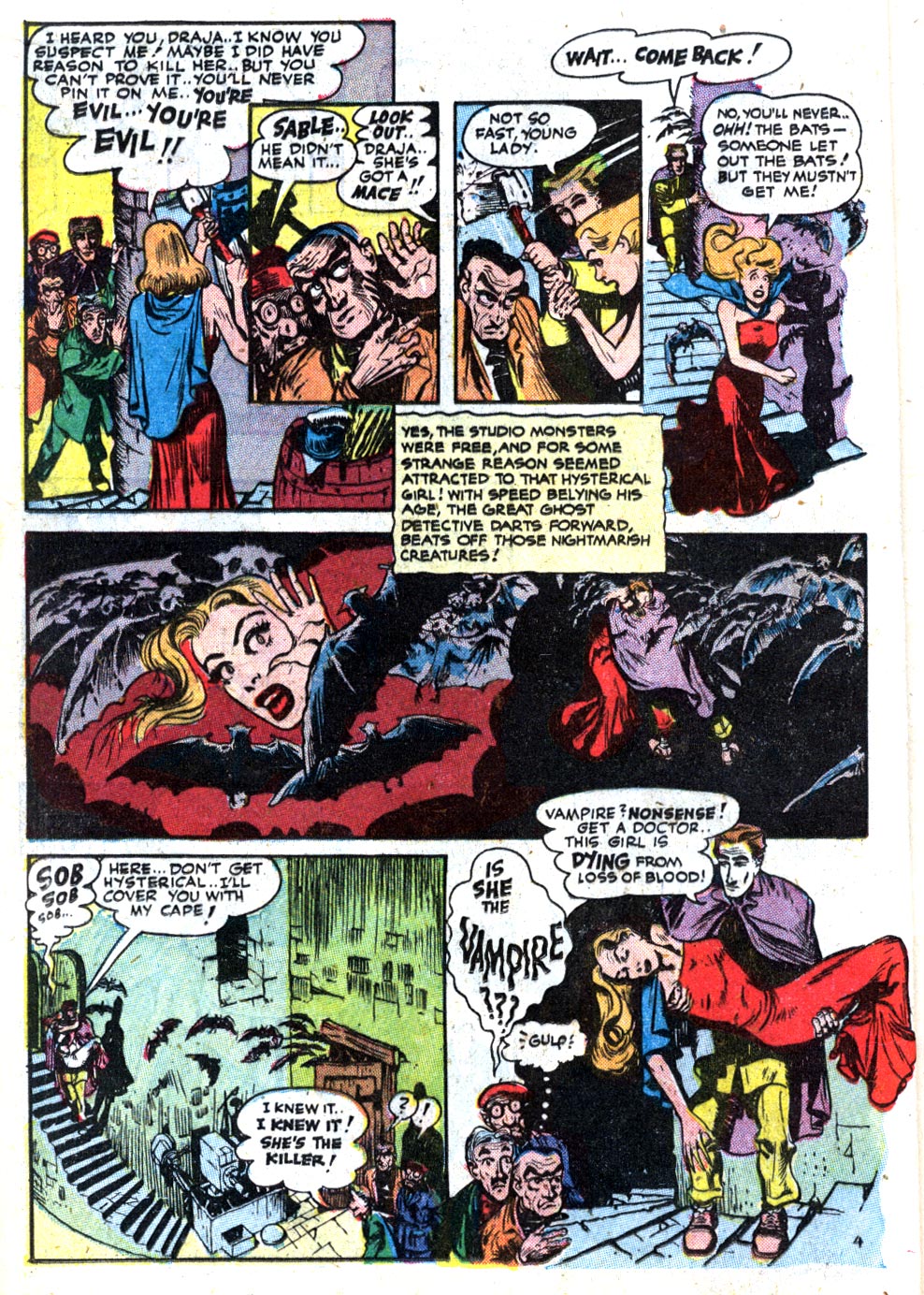 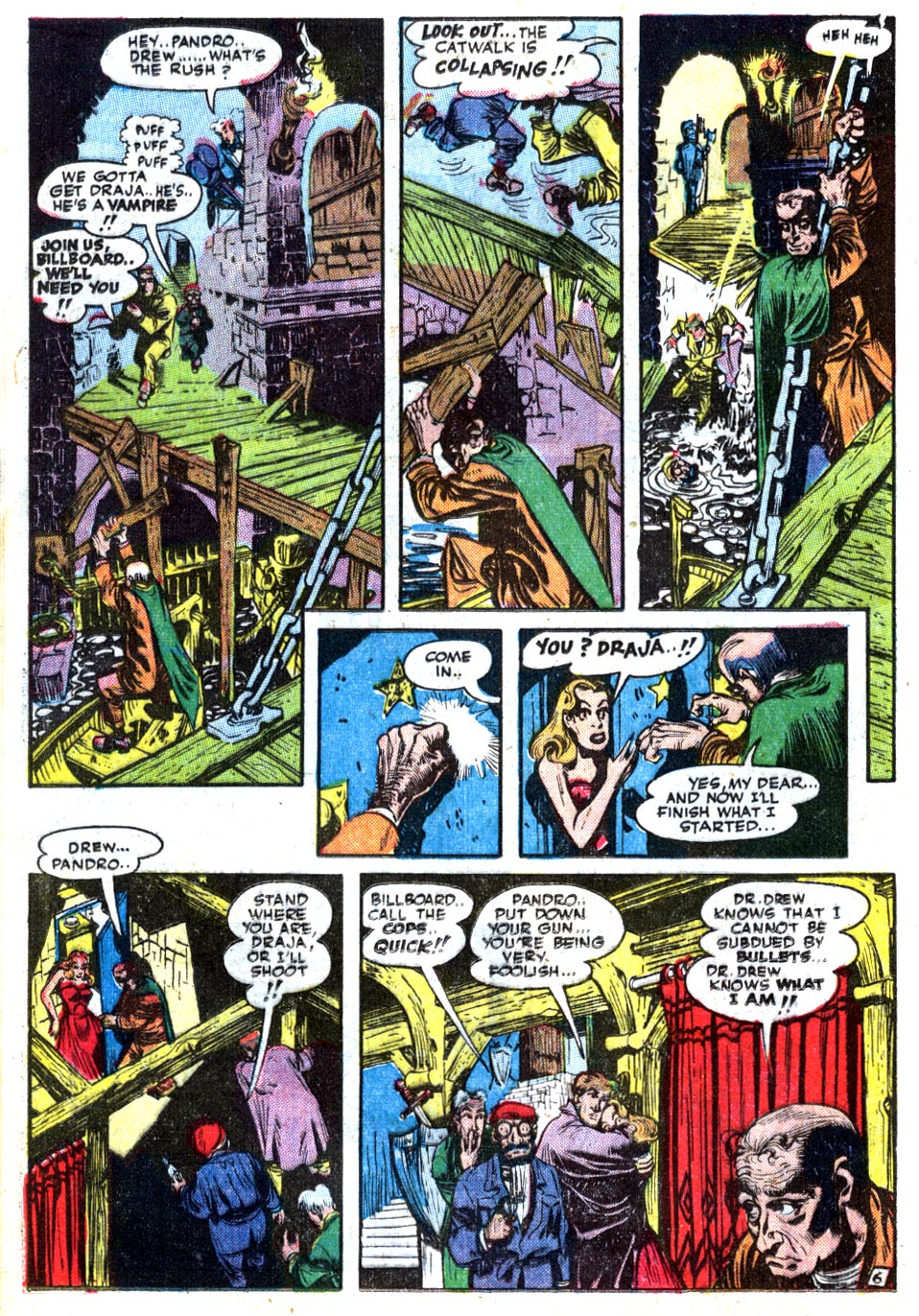 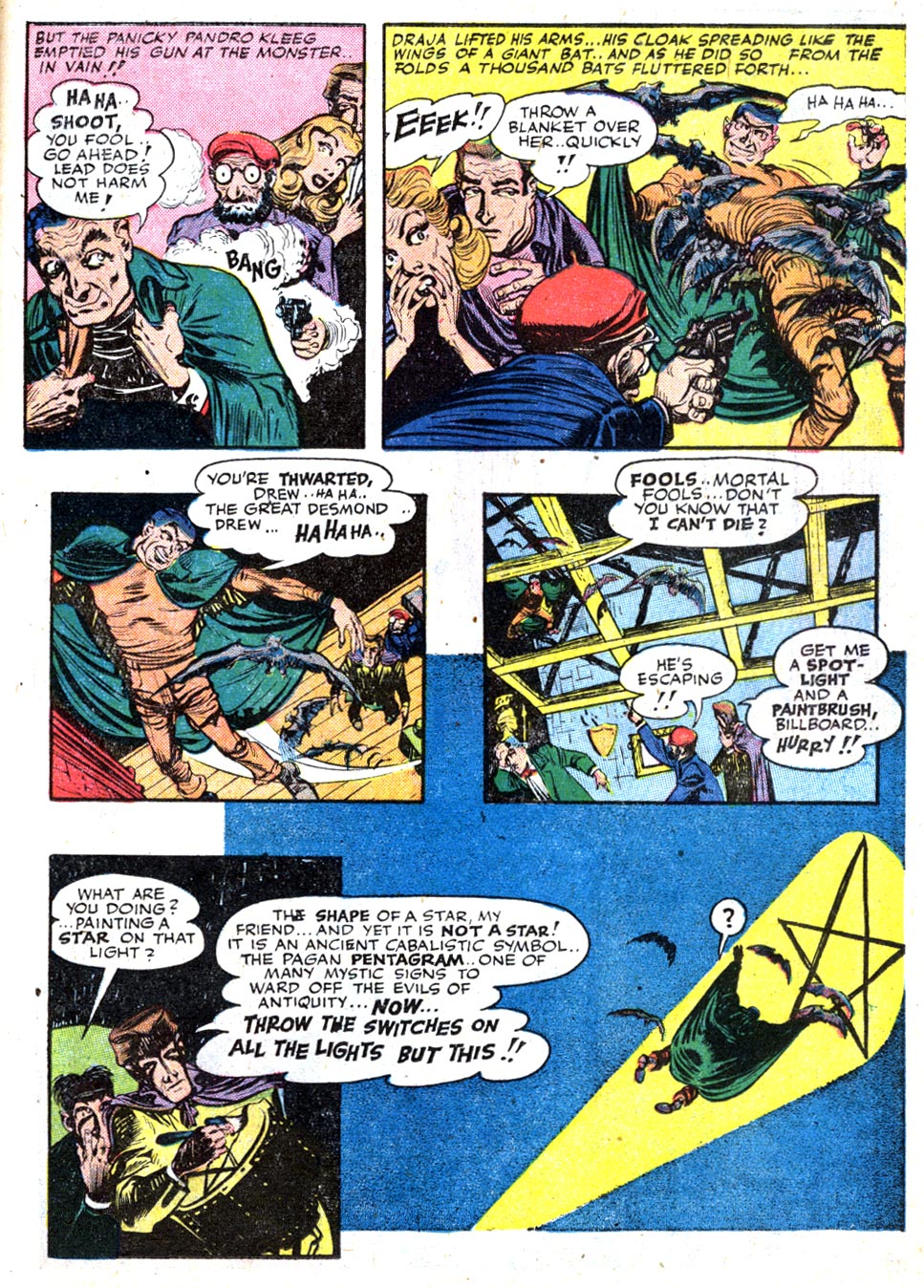 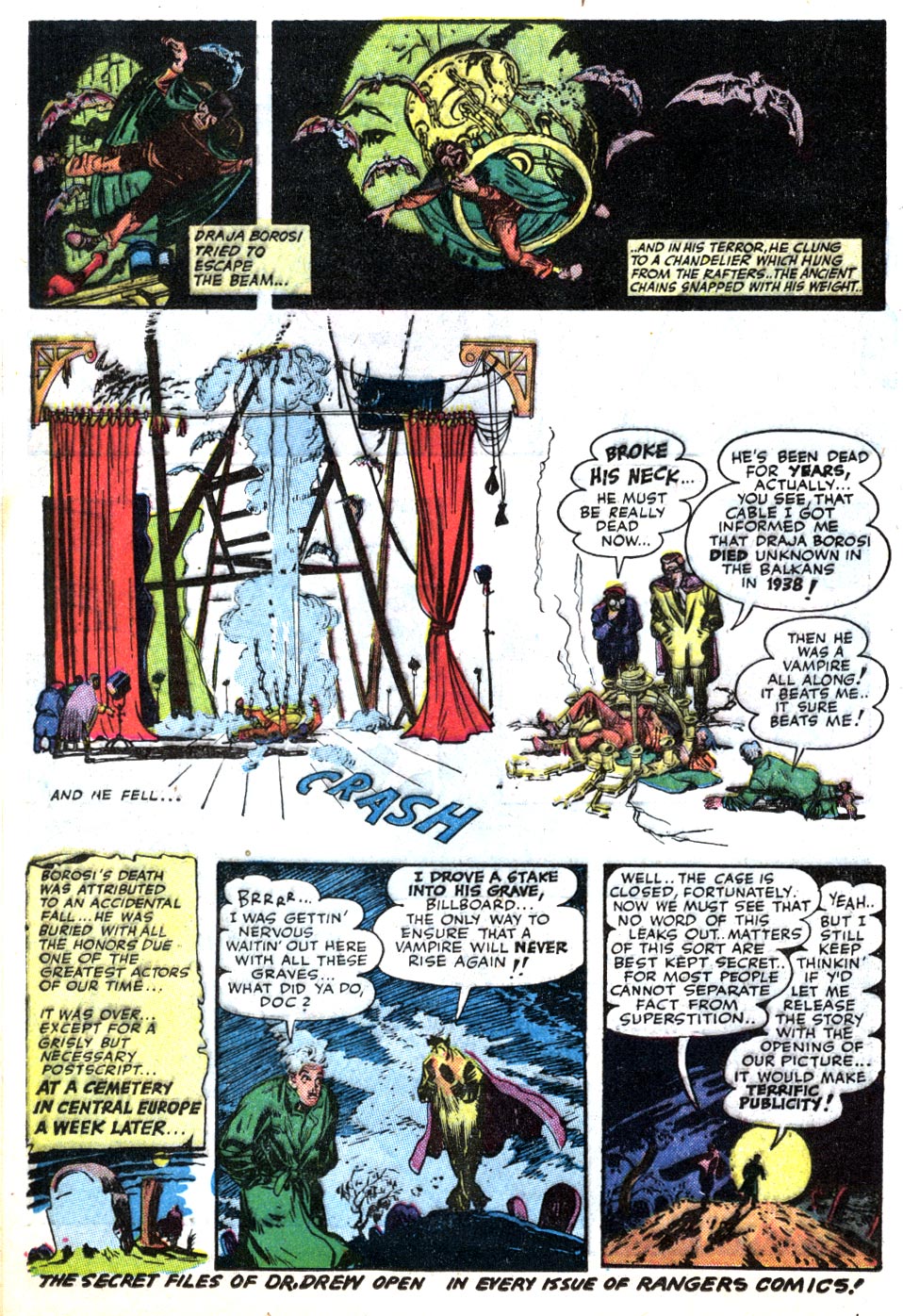 
Warning: count(): Parameter must be an array or an object that implements Countable in /www/htdocs/w014acc8/horrornet/wp-includes/class-wp-comment-query.php on line 405